In the last decades, the development of new technologies combined with new experiences in the structural design of bridges has brought up to the application of bridge construction equipment (BCE) such as cantilever machinery, precast launching gantries, formwork travellers, movable scaffolding systems and others. The reasons of their utilisation lay at most on the numerous advantages they include on a bridge project being an economical saving, a higher productivity, a decrease on the risk construction, a major quality of the project, a smaller environmental impact with other improvements. Nevertheless, the complexity of the problem is situated in their structural behaviour depending on the specific case and the lack of code provisions that can explain and give rules or recommendations about them in order to make the appropriate design, assembly, usage, dismantling and maintenance.

One of this BCE, which includes all the advantages mentioned before, is the Movable Scaffolding Systems (MSS), which were used for first time in Germany for the Krahnember bridge and designed by Hans Wittfoht. 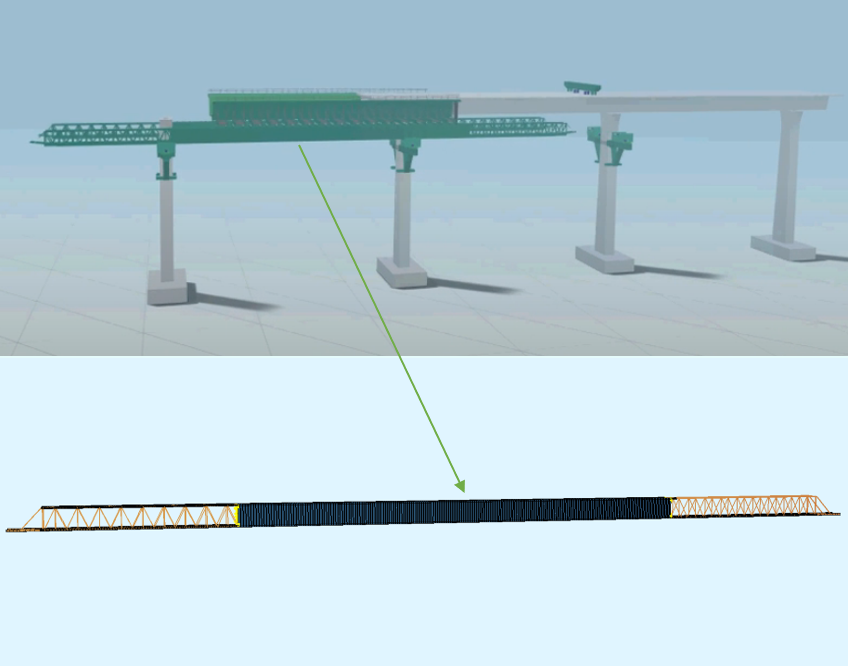 up to 60m, however, new technologies on this topic has achieved longer spans up to 100m with the use of Organic Prestressing System (OPS).

The equipment consists of a main structure, normally conformed by main girders, that supports the formwork of the bridge by other steel elements connected. Thereby, the structure must support the weight of the bridge deck on the formwork until this obtains its resistance. After this happens, the MSS is moved to the next span.

Thus, the utilisation of MSS can be resumed in two principal configurations: the pouring stage and the launching stage. These two stages have different conditions of supports and dissimilar magnitude of actions that can affect the behaviour of the MSS. Meanwhile in the pouring stage it will have the bridge’s deck load added to the rest of loads, the launching stage does not have that load, but it can present some dynamic loads produced by the higher wind action and the natural frequency of the structure, and the launching process. Furthermore, other singularities of the behaviour of MSS can be summed up in the deflection control, the thermal-induced displacements, the connection of joints, the interaction bridge-MSS and an accurate representation of the supports and structure.

This research is focused on the study-of-art, analysis and optimisation of Movable Scaffolding Systems. This optimisation comes from two targets: the extension of their applications and measures about the different possible behaviours it can pass through and how to manage them. Therefore, the aim of this investigation is the proposal of a design basis for MSS considering American and European code provisions and recommendations, recommendations about the structural analysis considering the different configurations, and the optimisation focused on the improvement in their applications and behaviour.